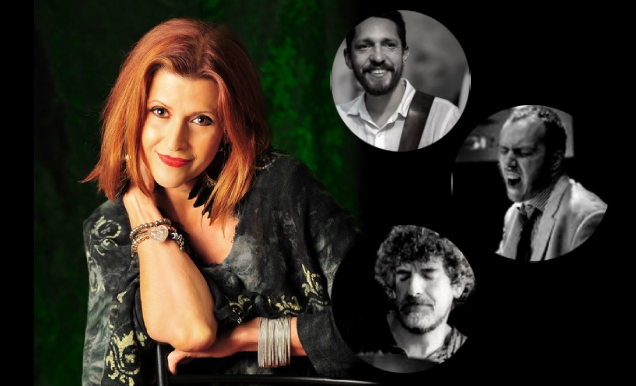 They look forward to presenting songs from their new album “Midnight Sun”, including classic jazz (Great American Songbook), some Modern Jazz Standards, Brazilian jazz arrangements as well as fresh takes on songs from Billy Joel to the theme from the classic film, Midnight Cowboy.
Come and join these artists on a night full of cool swing, warm Bossa Novas, sambas and world grooves!

“Midnight Sun has an inviting 1960’s metro-retro-futuristic ‘Verve/Blue Note/Pablo’ feel, as if from one of these prestigious label’s vaults, an unreleased 2-inch master tape was discoverd…” Stu Robertson (Jazz Radio Presenter 101fm)

“I love her voice, her timbre, her phrasing, her flair for improvisation, the way she builds up a high note, the way she gives meaning to lyrics” – Nikolas Fotakis, Editor, Australianjazz.net
“Ingrid’s voice takes the place of a sax or trumpet, with delicious results…”
Steve Robertson, Radio host Fleurieu FM, South Australia

“Libor is a genuine jazz guitar virtuoso, seamlessly combining the American blues-based tradition with European folk and classical elements, shaping them into a signature style that’s all his own. Libor and Ingrid share a similar approach to jazz, their assertive phrasing being infused with a sort of lyrical sensitivity….Jakub Zomer, a gentle giant with a wicked sene of humour, who tames the organ beast, making it purr and breathe fire - sometimes simultaneously - at his will.” Nikolas Fotakis, Editor, AustralianJazz.net

“Ingrid James is the kind of musician that immediately draws you in. Her vocal tone is total ear candy; warm, round, and focussed and her music is deep and informed by a great many influences” – Nick Mancini, US Vibraphonist/Composer"Midnight Sun, a potpourri of standards, lesser-known jazz gems and one original. Covering the years from 1930’s to today, this CD’s repertoire provides just the right balance of familiarity and surprise. It is dedicated to Ingrid’s late mother, born and raised in Finnish Lapland…” Steve Robertson, Radio host Fleurieu FM, South Australia